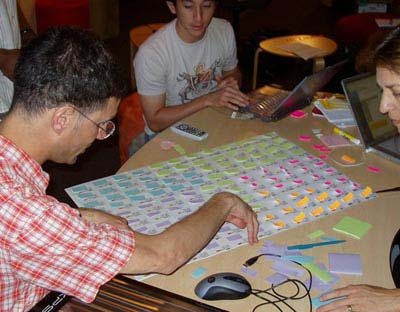 Here is a photo of the first prototype for the game. The board is a fictitious US state. Each square on the board is a census block with a population number, % democrat, and % republican. The different colored stickers represent different congressional districts. So there are five districts in this state. The game moves forward by changing colors on the census blocks (just like in real redistricting). Each time you change a color you change the demographic numbers for the districts affected. Game state numbers are being tracked by Greg, the grad student, using an Excel spreadsheet on the laptop in the background.
The first time we played this game the team got into an intense debate. People started arguing about the meaning of representative democracy. People were googling the Constitution. One of the designers sighed that "maybe my old boyfriend was right, your vote really doesn't matter", etc. After two hours of playing and debating I said "Guys lets stop playing and get back to work." But they wouldn't stop playing. In the rare times when I see a prototype that playtesters are so engaged in that they refuse to stop playing I know we are onto something special.
Posted by Chris Swain at 11:36 AM